Last month, creative web video channel NOWNESS released an incredible short film titled “The Foley Artist” which not only has become somewhat of a viral success, but won both Best Original Score and Best Production Design at the 2015 Berlin Fashion Film Festival.

Simply stated, the short is about a Foley Artist providing sounds for a fashion film. But it’s much more than that. Expertly crafted, The Foley Artist takes a deep, emotional and also downright hilarious look at the lengths people go to reach perfection for their craft.

Outside of being objectively entertaining for all, I personally found this an incredibly thoughtful film, being a Foley artist myself. Often I get asked, “What’s the weirdest combination of things you’ve Foley’ed with, and for what sound?”. So I was delighted to see this short highlighting THAT specific aspect of Foley. For me, it’s the most magical part. 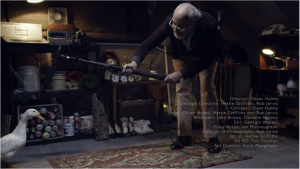 Allow me to give some context…

Foley Art is an interesting profession because it didn’t necessarily start from a purely creative place. As Filmmaking evolved technologically, Music was added, then Dialogue, then natural FX in the form of Foley performances and later also with sound libraries.

In a lot of ways it’s akin to ADR (Automated Dialogue Replacement) in that when Dialogue or Sound FX aren’t recorded cleanly on set, they have to be replaced in a silent sound facility. As Dialogue is the primary focus of the production crew, to make sure the actors’ lines are clear, the natural FX created by them like footsteps and physical props aren’t always picked up in as much detail. So actors are brought in to re-record their lines from set, and a Foley Artist performs their physical actions for the same purpose…in addition to adding detail, expression and viscera throughout the rest of the film.

As Foley has evolved over the years into a recognized art form, it’s now become more than just a technical service, and “The Foley Artist” explains why through clever storytelling and visual metaphors. Everything from simply putting on a pair of heels for footsteps, to painting literal building nails with nail polish, to going to the absurd trouble of getting a cat and shaving it, just to get a sound similar to an electric toothbrush. It’s as brilliant as it is ridiculous, because that’s a massive creative part of the art.

Like a lot of sound work, Foley is better to be felt rather than heard. It provides the human element of performance and emotion that audiences may not actively be aware of, but certainly feel. The act of combining objects to make new sounds and working them seamless into a film alters your perception of the world around you. Mundane sounds become magical, and sounds we assume are one thing, may be something completely different.

So next time you get ready for work or walk around outside, listen to the sounds that you, the objects, and world around you make. What you begin to notice might surprise you.