In our November newsletter we highlighted the release of Rowish Production’s ALTERED MINDS, and as mentioned, this month our blog highlights what went into the sound this incredibly dark film.

Altered Minds is a psychological thriller exploring dark secrets of the adopted family of a retired government psychiatrist. Like most family gatherings, a bit of drama is prerequisite and expected – but throw in Tommy, their estranged horror novelist son looking for answers from repressed memories, and things descend into darkness pretty quickly.

As a Sound Designer the film contains a treasure trove of themes and opportunities to use sound as a strong storytelling device.

The film takes place in a primary location, in the winter, as a snow storm starts to bare down. Tensions are high before the storm hits, and once it does, continues to build as the family is forced to confront both each other and their own traumatic memories. Tommy (Ryan O’Nan – Fargo Season 2) returns home claiming to be in search of his dead dog, but we quickly realise that he is haunted by something far worse; real or imagined psychological testing, programming and abuse.

While Altered Minds is centered around an ensemble cast of characters, it also includes a few non human characters thematically; the house, snowstorm and Tommy’s ‘visions’.

The house for example is the main location of the film, and descends into darkness emotionally, visually and sonically. As both the snowstorm and emotion in the house begins to grow, so does the voice of the house per our design. When we begin the film, it’s serene, warm and calm. We wanted to recreate that feeling of visiting home for the holidays, a refuge and break from working life throughout the year. As things begin to decline though, the house begins to speak – creaks, moans, and winds sweep through the house and change depending on where we are in it. As we descend through it, we shifted the tones from more airy and brittle into more suffocating, like we’re in the bowels of a giant creature.

The snow storm approaching is a constant character from the very first shot of the film, as we progress through the opening credit montage viewing the cold and brittle woods that surround the house. Like the house, trees creak and moan, baring the weight of the frigid cold and ice around them. Birds, which hold a very specific theme for the film, establish omnipresence as if they’re watching us from the beginning. As the the tensions grow in the house, so does the storm. At first, it simply establishes the time of the year – cold and snowy – and it rolls in like a blizzard surrounding the house as we build towards the climax. Just the layers of wind, howls, drones and frosty layers we used for the storm have an arc that, without any other sound in the film, gives the audience a sub-narrative for the film, mirroring the characters’ own arcs.

Finally, Tommy’s ‘visions’, which we’re not sure if he is remembering or hallucinating. Most of the flashes we see and sounds we experience from Tommy’s perspective center around several images…birds, a demonic light bulb, and searing transmission sounds. As the backstory indicates, Tommy has a fascination with birds from childhood. We took this aspect, which is a very large part of the character development, and brought it out further with sound. I re-created and manipulated the sound of wings flapping and turned them into textural elements using Izotope’s Iris, transforming them into pulsing, burning sounds during some of the more climactic moments of the film as Tommy’s trauma starts to take over.

We experience Tommy becoming fixated on bad wiring in the house, as he keeps seeing lights flicker and give off progressively worse sounds – searing, screaming electric screeches that start out simple and evolve toward what we called “The Demonic Lightbulb”. A large component of this was created in the same process as the transmission sounds that torment Tommy’s brain. Using a Moog Analog Synthesizer, I spent days recording, and weeks editing the most vile and infuriating sounds that I could create. All sounds were designed with the themes of radio transmissions, feedback, and the effects certain sound frequencies have on the brain at the forefront.

While these are some of the main elements created for the film to specifically bring out conceptual elements, there are tons of other fun sound moments in the film…and even some that got left on the cutting room floor.
ALTERERED MINDS is available on VOD worldwide. 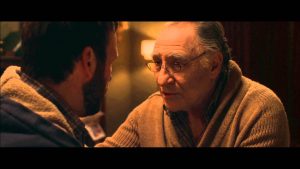